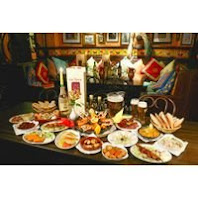 One of my favorite restaurants in London is a chain called La Tasca. They have a few in the US as well, but they're all on the east coast, which doesn't help me. La Tasca is a spanish tapas bar and the food is truly outstanding. It's also quite reasonably priced (as long as you don't take into account the weakness of the US dollar). I tend to go to the one in Covent Garden which is a short walk from the hotel I stay at in Trafalgar Square. The Cordero en salsa is my favorite item. I normally am not a fan of lamb, but they do it in meatballs with a tomato/veg gravy-like sauce and it's to die for. I have literally dreamt of eating that dish.

An interesting side note is that in England they pronounce "tapas" differently than how I learned it. I say it like "tah-pahs", but they say it "ta-pahs" where the first "a" is said like the word hat. I've actually caught myself saying it that way a few times and without the British accent I just sound like an idiot. That brings up another point about the word "cheers". I don't mean when you say it while toasting a drink, I mean the British use of the word. I was completely baffled by how to use it initially, but having been to England enough times I believe I understand the context and correct usage now. However, after hearing an American say it an excessive number of times at a bar in Boulder, I have come to realize that without the British accent, that's another word that just doesn't work for us.
Posted by Scott Lasica at 8:01 AM