Waiting again for the iPhone

Just when I had almost convinced myself to pick up an iPhone, I stumbled across this acticle: http://www.appleinsider.com/articles/08/02/06/att_plans_3g_expansion_ahead_of_second_gen_iphone.html. It turns out that the current iPhone only works with the 2.5G AT&T network (EDGE I believe it's called). Apple is going to soon release a new version of the iPhone that can connect to the 3G network that AT&T claims to be country-wide by the end of the year. 200K versus 1MB is a big enough difference to wait for. I guess that shows why they keep new product development under such tight secrecy, or you would constantly have 1/2 your potential customers waiting for the next version.

I need to next research how the broadband part of the iPhone works. I have a sprint card integrated in my new laptop and if I could simply replace that with an AT&T card and "share" the account across the two devices then I can save some $$. If you already know the story here please let me know.
UPDATE: Recent press says June '08 for the 3G iPhone. Only 3-4 more months to wait...
Posted by Scott Lasica at 7:21 AM 2 comments: 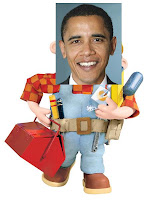 When Oprah endorsed Obama and subsequently started campaigning for him, his support jumped tremendously. He's courting the religious vote by emulating the way Reverend Martin Luther King Jr. spoke, and now he's even going after small children's support. His campaign catch phrase has become "yes we can", which he claims is in reference to his statements of change. However, if you have small children, you have doubtless at least heard Bob the Builder on the TV in the background. When you hear Obama say something like, "they say we can't do it", and the crowd around him yells out, "YES WE CAN!" the similarity is uncanny. I think it's simply his campaign strategists' latest brilliant move to get yet another very powerful celebrity endorsement, targeting an age demographic previously untouched. Will the cleverness ever stop?
Posted by Scott Lasica at 6:57 AM No comments:

It may be time to get a new chocolate mold 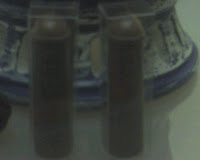 One of my employees stayed at the Hilton Amsterdam Airport Schiphol this last friday night. He has status with them, so they bumped him up to an upgraded room and left chocolates for him on the nightstand. As you can see from the picture, he said the shape wasn't very appetizing. Maybe they were intended for the red light district and got sent there by mistake...
Posted by Scott Lasica at 12:58 PM No comments: