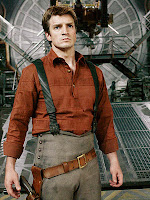 Ok, going to geek out for a bit here. My first introduction to Nathan Fillion was in Firefly. As soon as I saw the first episode, he became a favorite of mine. Since then, I've seen him in Serenity (the movie based on Firefly), Dr. Horrible's Sing-a-long Blog (truly amazing web show) and Desperate Housewives. Just to clarify, Becca watches Desperate Housewives while I play games on my laptop, and because it's on in the background I can't help but hear all the lines and glance up and see what's going on. Yes, it can be funny at times, but I digress.

I set up the DVR to grab Castle last week (after seeing that Nathan was starring in it), and all I have to say is WOW! Not only is that a very well written show, but Nathan brings the perfect touch to it. I'm already hooked and look forward to being able to watch many episodes to come.

I have realized recently that there are 4 actors that have played roles that seem to have a theme to them that I very much enjoy. They are Nathan Fillion, Richard Dean Anderson, Ben Browder and Joe Flanigan. They have all played characters that are tough, yet very sarcastically funny. 3 of the 4 were in Stargate shows, which sure doesn't hurt since I love that franchise. If you know of other actors that fit into this grouping, please let me know and I'll pick up their works.

In the meantime, we need more of the other guys in new shows. I hear rumor that Stargate Universe may actually happen, so hopefully I'll get weekly doses of a few of those guys, plus bonus for David Hewlett.

Speaking of scifi, are they going to create another Star Trek show or let the franchise wither into dust? Yeah, the new movie is coming out, but I want to be back in the nirvana of 3 trek shows on the air at the same time. Having STNG, DS9 and Voyager on was mucho happiness.
Posted by Scott Lasica at 7:37 PM

I agree with your observations about Castle and also like the same actors.
Unfortunately, aside from perhaps a guest cameo from RDA and perhaps Michael Shanks on Universe, none of the characters from Atlantis or SG1 are scheduled as regulars.
It is an entirely new show set on a "lost" ship.
I am really looking forward to seeing these guys in other things, though!

Thanks for the info. That is too bad, but hope to see them grabbing good roles again soon.

David Boreanaz is another actor that fits into the group. I loved the series Angel and Bones. I hope either Richard, Nathan or David is SGU as a permanent char.

Ohh I saw the trailer for SGU, its like BSG's dark theme + lost like drama crap between characters. I don't think I'm going to like it.