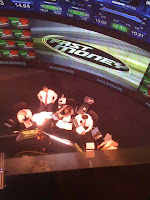 So this year I added yet another hat at work: business development. At first it was a little confusing as to what I was supposed to do. However, I've been on a roll lately meeting and greeting with the best of them.

Last night I attended Intel's Nehalem launch event held at the NASDAQ Times Square building. While "networking", they were filming Fast Money below us. There were some definite big players in attendance, and the catering and wine stations were supurb.

So I have to say that bizdev is pretty cool. As far as I can tell it's lots of shmoozing, lots of talking, and lots of asking. I need to engage phase 2 soon: somehow increase our revenue because of the shmoozing. It makes me think of South Park:
1) Collect underpants
2) ?
3) Profit!

Or in my case: