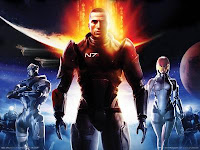 My two favorite games so far on Xbox 360 by far are Knights of the Old Republic 1 and 2 without a doubt. I love the mix of first person shooter with role play. Since KOTOR 2 I've been in a Star Wars drought for games. While I am anxiously anticipating the release of the new title, with amazing looking force powers I was introduced to a gem that's been out for a while now. Mass Effect is made by Bioware, the same guys that made the KOTOR games. It's obviously the same engine, and I've heard that they simply lost their license from Lucasarts. The game has biotech abilities which are suspiciously similar to force powers, but it's still tons of fun. They've improved the engine a bit, and if you hadn't played KOTOR before you wouldn't know it was "supposed" to be Star Wars. I'm still early in the game, but I'm having a blast. I highly recommend it if you don't mind becoming quickly addicted.

Take that Lucas!
Posted by Scott Lasica at 6:39 PM